Phoenix Rising of Winston Salem, Inc is a 501(c)(3) founded in March 2017 by Winston Salem defense attorney Kerri L. Sigler and a volunteer Board of Directors. Phoenix Rising's original mission was to fund the restart for Winston Salem's Drug Treatment Court, which lost State funding in 2011 and had been absent ever since. Not wanting to exclude those not caught in the criminal justice system from its purpose, Phoenix expanded its mission to facilitate treatment and raise awareness. 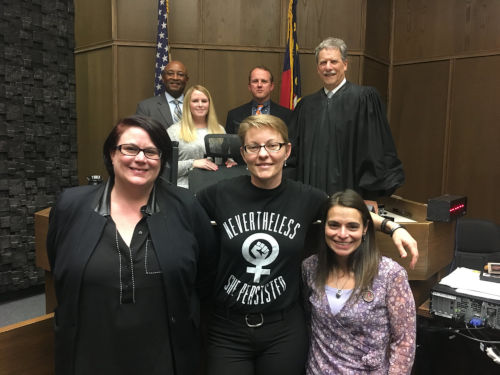 Phoenix Rising officially launched on June 1, 2017 and within its first month, it had forged a partnership with the City of Winston Salem and raised the funds needed to match the City's grant and fund Drug Treatment Court for one year.

In its first 6 months, Phoenix Rising also launched an awareness campaign called #NoOneIsImmune comprised of a series of short video interviews with recovering addicts and the family members of those we lost to the battle. The videos were viewed over 10,000 times on social media.

Phoenix Rising Founder and President also delivered courtroom speeches each morning before court sessions began warning people of the addictive nature of prescription opiates. Her speech was recorded and viewed over 15,000 times on social media. Several community members credited her speech with inspiring them not to take the prescription painkillers they had been prescribed.

On December 1, 2017, thanks to the work of the Phoenix Rising Board in raising the necessary funds and securing a partnership with the City, Winston Salem's Drug Treatment Court held its first session in 6 years.

In 2019, Phoenix Rising looks forward to fulfilling the treatment facilitation prong of its mission by launching its Treatment Database, which will allow addicts and their families to find the treatment options available to them and right for them by selecting basic criteria such as health insurance status, gender, and MAT preference.